At Banzai Cloud we’re building a feature rich platform, Pipeline, on top of Kubernetes. With Pipeline we provision large, multi-tenant Kubernetes clusters on all major cloud providers - AWS, GCP, Azure and BYOC - and deploy all kinds of predefined or ad-hoc workloads to these clusters. We wanted to set the industry standard for the way in which our users log in and interact with secure endpoints, and, at the same time, we wanted to provide dynamic secret management for each application we support. With those goals in mind, and while taking into account our preference for native Kubernetes support, we selected Vault.

This operator (and the Bank-Vaults project itself) are all part of the Pipeline Platform. We strive to offer enterprise grade security to our users, and to applications deployed to Kubernetes through Pipeline. In fact, it’s a tier zero feature of our Pipeline Platform.

We’ve already described what Operators for Kubernetes are in a previous blog post. In this post we’ll explain how our Vault Operator was born out of the new Operator SDK and our Bank-Vaults project.

There already exists a Vault Operator developed by CoreOS.

The Vault Operator makes it easier to install, manage, and maintain instances of Vault – a tool designed for storing, managing, and controlling access to secrets, such as tokens, passwords, certificates, and API keys – on Kubernetes clusters.

This is a great tool for installing a self-contained instance of Vault and etcd on top of Kubernetes. Using their work as inspiration, we’ve begun working toward our own solution. Although both ideas are similar, we started over and based our project on the brand new Operators SDK, which has really sped up development.

Here are a few features that we sorely missed from existing operators, and which we found as opensource projects on GitHub:

These features are already embedded in our Bank-Vaults project (where the heavy lifting is done for us), which is the most comprehensive open source project built on top of Vault. This means that the whole Vault experience is still cloud-agnostic, just like it was before - except the operator, which is extended with event handling.

All of the above configurations are done in a single YAML file. An example Vault Custom Resource Definition looks like this:

You may have noticed where the TLS certificates come from in this configuration and found it strange. Don’t worry, they’re automatically generated by the operator via Sprig functions, which are also used in Helm.

The main benefit of this operator, in contrast to our Vault Helm chart, is that we can react to certain Vault events in a standardized way (via the operator’s framework). Here, Vault is represented as a Kubernetes resource, and its state is stored in the Vault cluster. 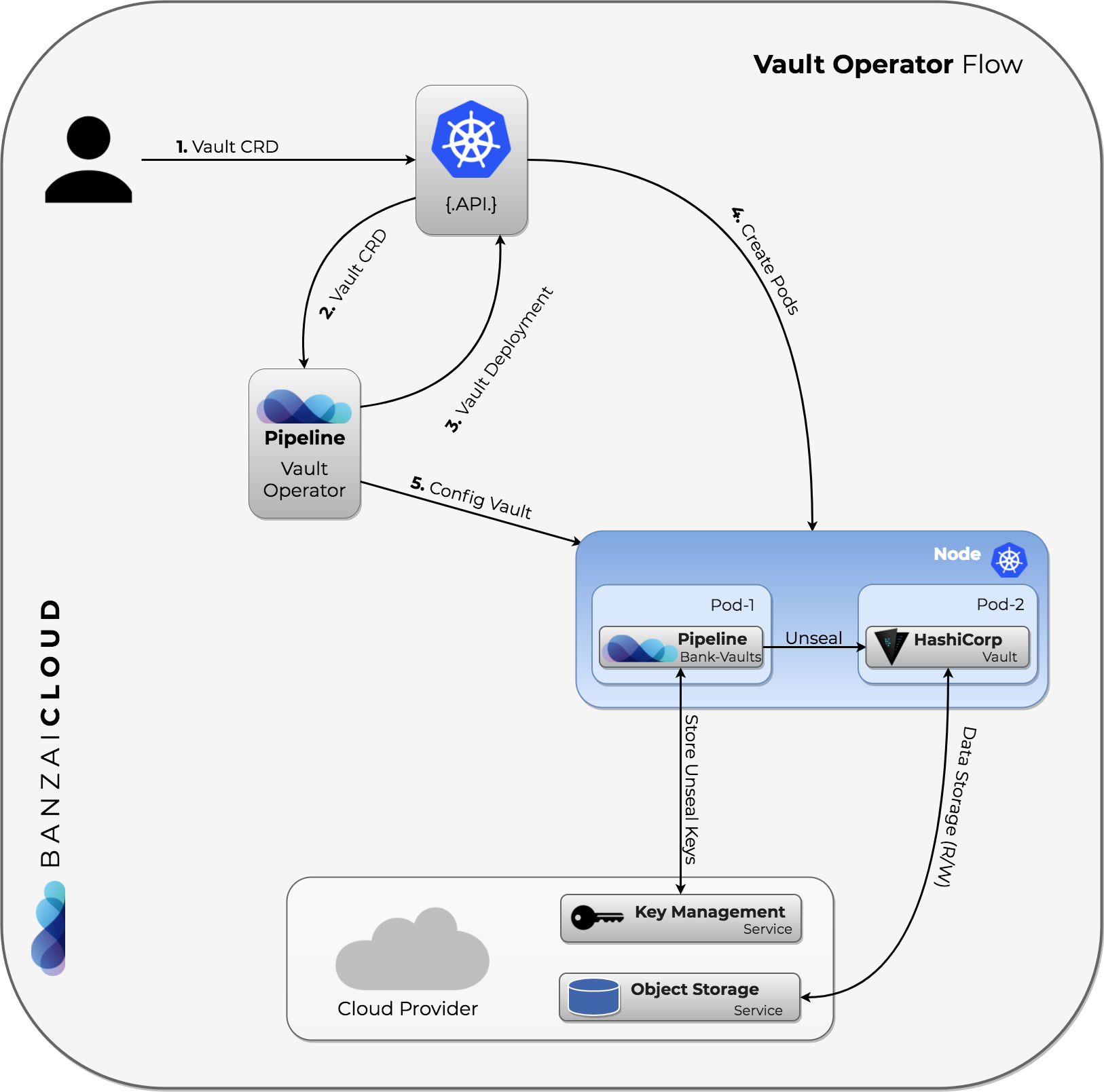 This is the simplest approach. The following commands will install a single node Vault instance that stores unseal and root tokens in Kubernetes secrets:

After a few seconds, you can check the existing operator and vault pods:

To demonstrate the HA setup, let’s deploy Vault on Google Cloud. For this example we’ll assume you have a GKE Cluster and have configured the Service Account with the following IAM Roles:

If you don’t have a running GKE Cluster provision one with one click using Pipeline.

We’ll assume that your kubectl is pointed to the GKE cluster, so you can continue deploying the operator:

Here you can see a sample HA configuration:

Prometheus metrics are also in the making 🔗︎

We also plan to add Vault Prometheus metrics to the operator’s feature set (a feature that the CoreOS Operator already has), but first we’d like to carefully analyze our available options and decide what’s right for us and our users. For more details, please see the attached issue. We place a lot of emphasis on observability and do some pretty advanced monitoring of our federated clusters, so stay tuned as this will also land soon.

Unseal from mobile, through a quorum 🔗︎

There are a few ways of unsealing Vault that are already built into Bank-Vaults, but we weren’t entirely satisfied with those options. Since the operator is capable of listening to Kubernetes events - thus Vault restarts and statuses as well - we can notify alerting systems and notify operators to unseal Vault if, for example, Vaults has crashed. This allows us to unseal Vault with human intervention, using unseal keys distributed amongst a group of people, with keys stored on mobile devices (or laptops). Such a quorum would receive notifications on their mobile devices and, pending approval, the application would unseal Vault right from their phones. The Vault Operator would open up an unseal port for a limited time in order to minimize the attack window, during which Vault is sealed.

We will soon be releasing an iOS and Android app, and a Golang binary for different OSs

This project is open source, of course, and its code is tightly integrated into the Bank-Vaults project and can be found, here, in our GitHub repository.

We put a great deal of effort into securing users of Pipeline, since security is one of the platform’s core building blocks. 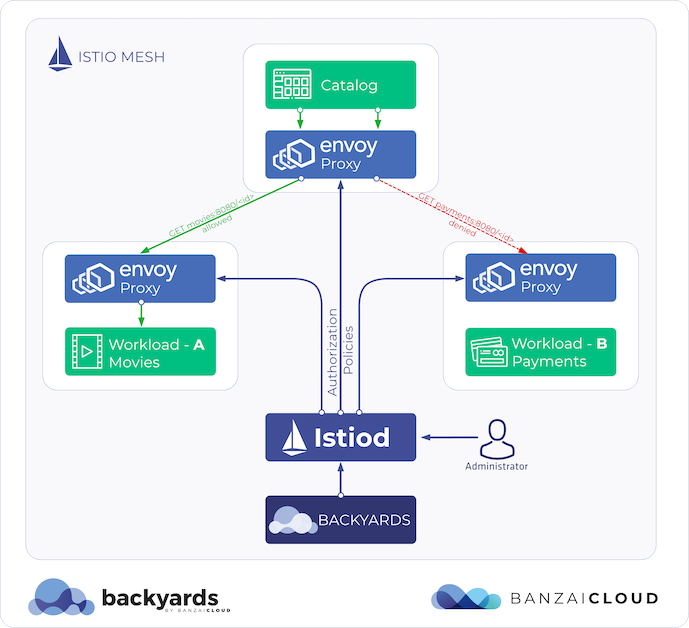 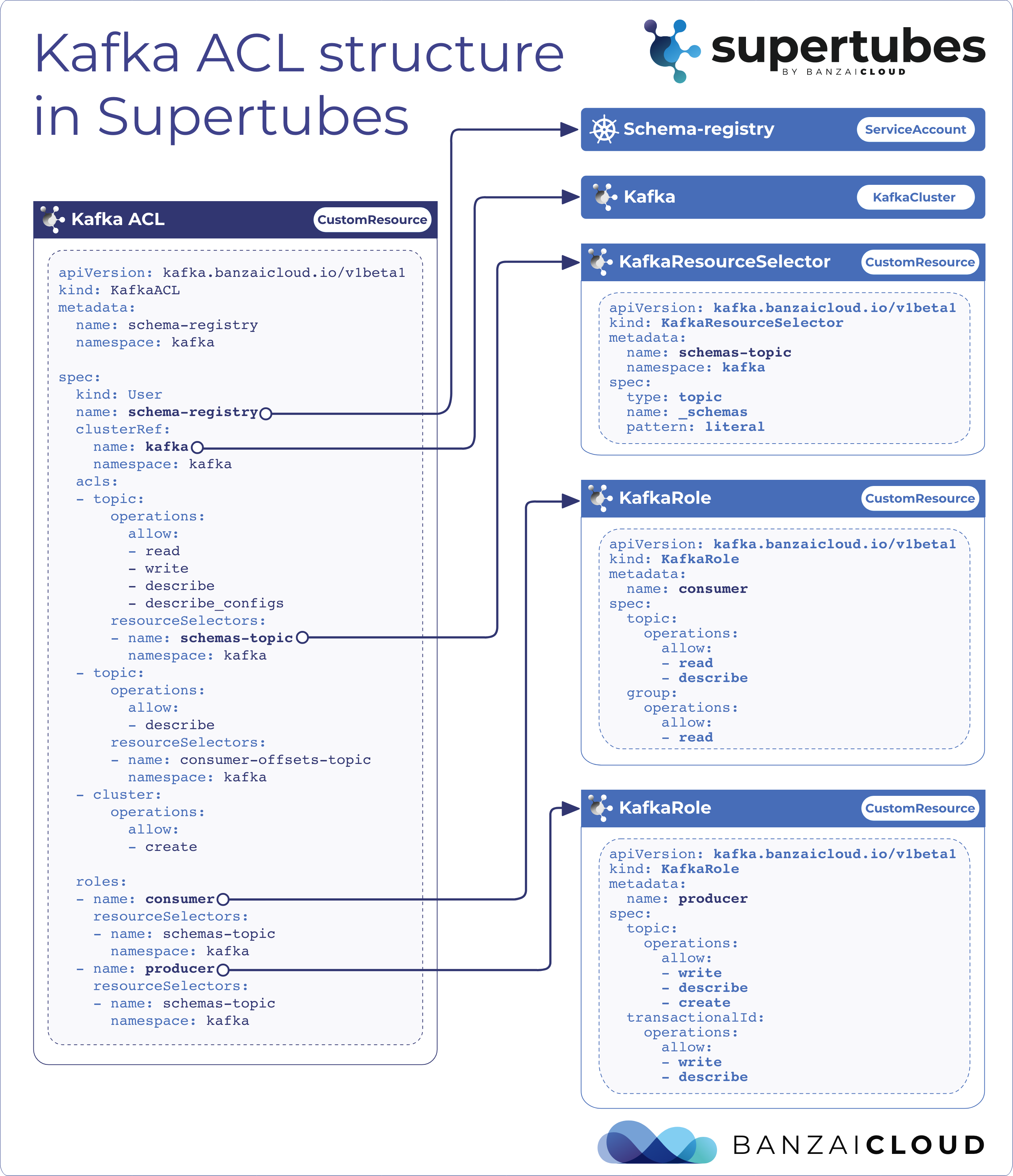 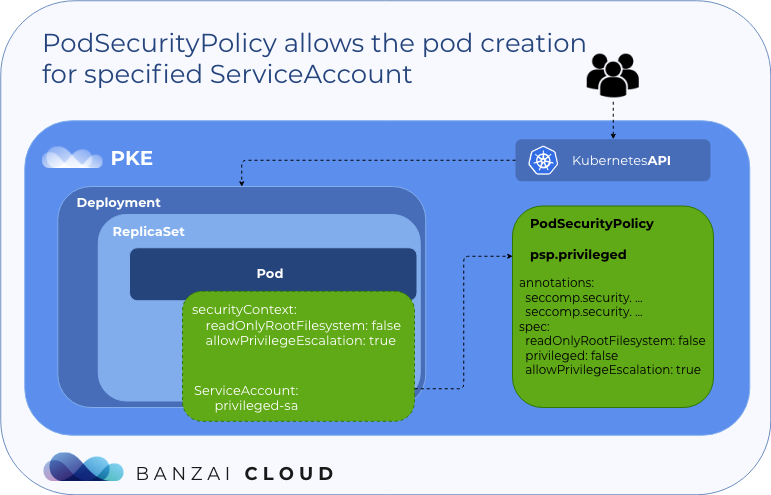