Every major cloud provider offers a managed Kubernetes service that aims to simplify the provisioning of Kubernetes clusters in its respective environment. The Banzai Cloud Pipeline platform has always supported these major providers - AWS, Azure, Google, Alibaba Cloud - turning their managed k8s services into a single solution-oriented application platform that allows enterprises to develop, deploy and securely scale container-based applications in multi-cloud environments. While this was very appealing from the outset, we quickly realized there was demand among our enterprise users to implement more sophisticated use cases that were limited by our initial approach. Our next step, moving from the cloud into our customers’ data centers in on-premise and hybrid environments, necessitated the building of our own CNCF certified Kubernetes distribution, PKE.

In this post, we’ll discuss the challenges that arose from our decision to support users of Azure Kubernetes Service (AKS), as well as the addition of Azure support for our Kubernetes distribution.

When designing the Azure infrastructure for PKE, we took all of the above-mentioned limitations into consideration, alongside some edge cases and our Istio operator users’ CNI requirements, and decided to take a different approach to AKS.

Pipeline provisions all infrastructure components within the resource group provided by the user.

The following diagram is a high level representation of Azure infrastructure for PKE provisioned by Pipeline. 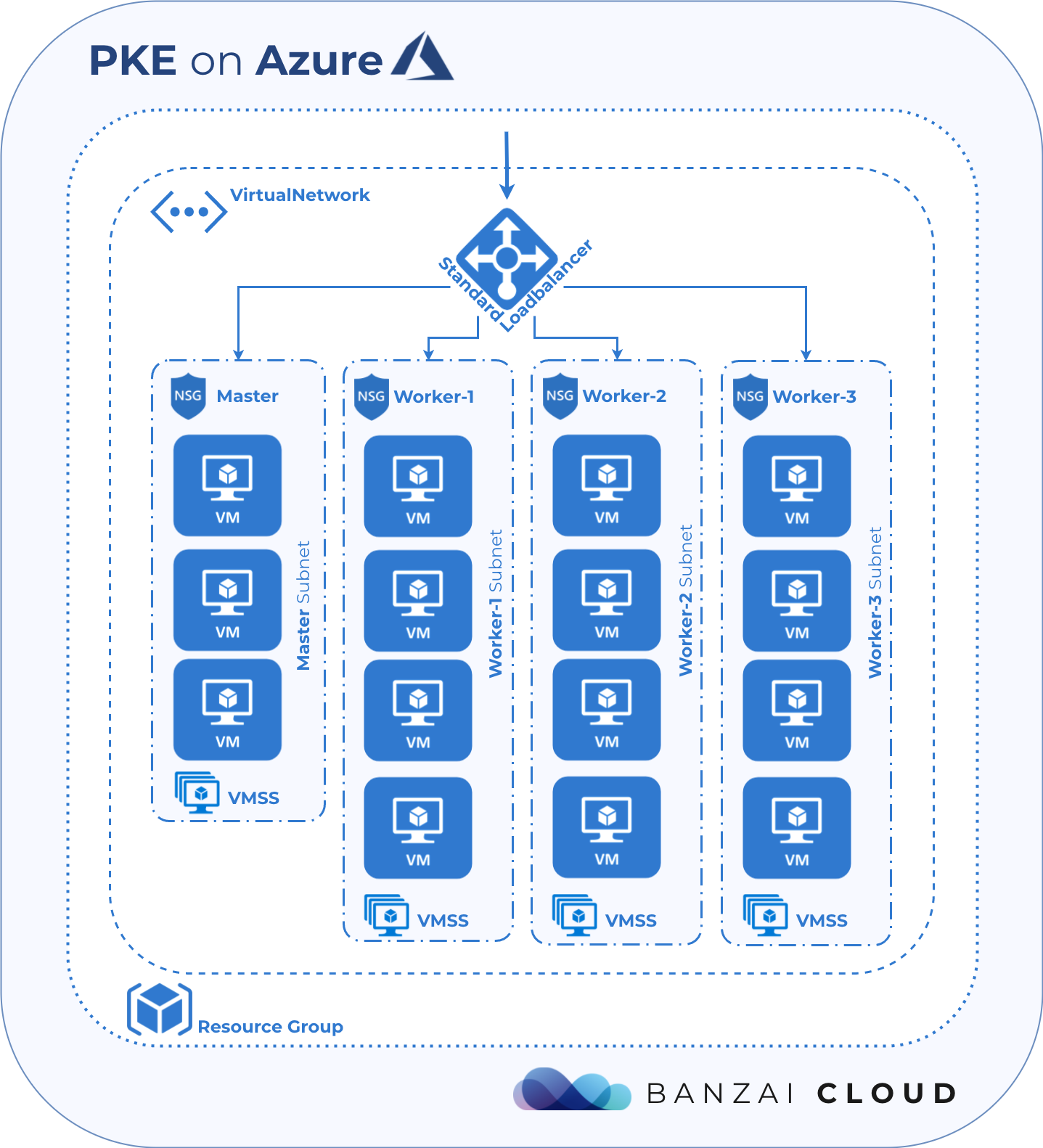 The user data script mentioned above passes information through config to Kubernetes, such as tenant id, resource group, virtual network, network security group used by workers, route table, cluster name, etc. This information is required by the k8s controller in order for it to identify, modify and create new infra resources inside the resource group.

A k8s cluster can be deployed to a resource group, since reconciliation logic in the service controller may delete the public IPs that were created by another k8s cluster inside the same resource group, even though they were associated with the load balancer of another cluster.

Based on our preliminary investigation of this issue we beleive it is caused by shortcoming in how Kubernetes identifies the Azure public IP resources to be deleted.

Here is what we’ve found so far:

We’ll continue the investigation to see if there is a workaround that we can do to overcome this. In the same time we opened a GH issue in the Kubernetes repository.

Lets conclude this post here - as there was lots of technical deep dive into specifics of how we believe are doing differently (and hopefully better) than Azure AKS. In the next PKE on Azure posts we will follow up with some additional cloud agnostic details and benefits of PKE over Azure AKS - centralized log collection, federated monitoring, Vault based security, disaster recovery, security scans, multi-dimensional autoscaling and lots lots more. Icing on the cake will be a service mesh deployment across Azure, on-premise and AWS/Google - all within a few clicks on the UI and fully automated by Pipeline.