It’s been a while since we published a new release of One Eye. That doesn’t mean we haven’t been working on it, quite the opposite! We’ve been busy making lots of improvements and adding features. This blog will highlight the many changes made since version 0.3. 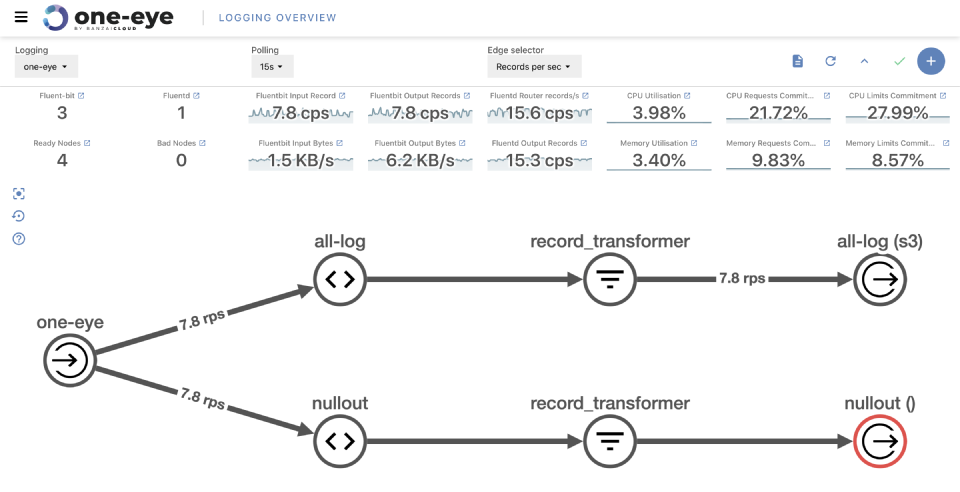 Let’s start with some great news! Logging Operator (responsible for the One Eye logging sub-system) is now the official logging backend of Rancher. We love to see open source projects work together to provide an improved experience to end-users. And, as long as we’re on the subject, let’s take a look at some of the improvements made in the Logging Operator.

Improvements in the Logging Operator 🔗︎

Naturally, more users means more issues. As you can probably imagine, they have made tons of feature requests. We gathered the most popular questions and errors and made improvements that make our Logging Operator easier to use.

The more complex the configuration the harder it is to debug problems. Beginning with Logging Operator 3.8 all custom resources have a Status and a Problems field. What are they good for? Let’s see. In a healthy system, the output of a clusteroutput resource should look like something like the following.

The ACTIVE column indicates that the ClusterOutput has successfully passed the configcheck and presented it in the current fluentd configuration. When no errors are reported the PROBLEMS column is empty.

Take a look at another example, in which we have an incorrect ClusterFlow.

You can see that the nullout Clusterflow is inactive and there is 1 problem with the configuration. In order to dig a little deeper we need only to check the status field of the object.

The problem is trivial; there is no nullout2 ClusterOutput present on the cluster.

In our previous blog Warm Up Logs from Cold Storage we noted how important it is to have a proper S3 object key format. To avoid misconfiguration of that crucial attribute we introduced the oneeye_format parameter. You can read more about S3 output in our documentation.

Several bug fixes and improvements have been published since the latest release of the Logging Operator. We updated and tested many of the plugins to provide a seamless experience during logging.

This new feature automates the loading of archive logs into Elasticsearch. We peeked into this feature in a recent blog post, Warm Up Logs from Cold Storage. Now you can try it out! 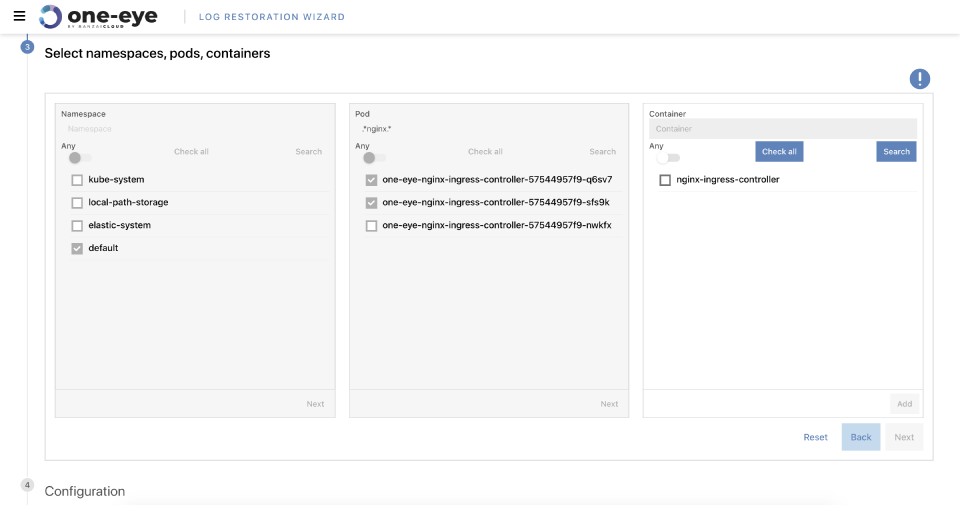 One Eye is a relatively young project with a function orientated roadmap. However, to use an observability tool effectively, you need a fast and responsive UI. Embedding grafana dashboards is the fastest way to provide charts for the user, out-of-the-box, but we struggled with the loading times of such dashboards. From version 0.4 onward, many of the embedded dashboards will be native graphs. I’m sure you’ll notice the difference in performance!

As we’ve been working towards a functional correlation UI, we’ve been implementing components one by one. From version 0.4 on, you can use metrics view to query your Prometheus metrics. This is a simplified way of quickly accessing Prometheus datapoints.

Since fluentd and fluentbit have trouble ingesting logs into Loki, we added support for simple Promtail installation. As a result of its architecture, fluentd can’t guarantee message ordering so a lot of messages are dropped by Loki. fluentbit recently published improvements to its transport logs. Moreover, they published the official version of Loki. There are still some improvements that have to be made, like those to its retry logic. Until fluentbit Loki output is stable enough, feel free to use Promtail. After that, we will likely to drop Promtail support and add a configuration for fluentbit Loki output.

To provide you with more freedom when customizing different parts of the system, we switched from a Grafana Helm chart to a Grafana operator. The operator gives you more freedom when it comes to you dynamically adding data sources or dashboards. You can now enjoy all the features Grafana Operator makes available.

As the stack grows more complex, even the installation flow has begun to take considerable time. We introduced a simple install command to install all necessary components for an out-of-the-box monitoring solution. Because configuration depends heavily on the Infrastructure you’re using, we’ll introduce profiles to handle different environments. This configuration includes different alerting rules etc…

Last but not least we added a log generator. This feature is better for testing and test automation, but hardly worth mentioning. For now, it is essentially the same log-generator we already wrote to generate Nginx access in log format. If you are new to One Eye, this is a great tool to test different filters, outputs etc.

It can be challenging to document a project as big as One Eye. To ease this burden, Kubernetes has an explain command. However, our observer complexity would mean that we’d generate CRDs that included the documentation, but were too large. That is why we ported the explain command into our binary.

Under the hood changes 🔗︎

As you can see, we’re taking this opportunity to expose our users to many new features. However, we also made a lot of improvements under the hood.

We moved our image build from Docker to Github 🔗︎

Since Dockerhub announced it’s “pull rate-limiting” for open source containers, we moved our image repositories to Github. If you hardcoded old image versions, please be careful and update the repository as well.

If you are interested in what’s going on under the hood, there is one more big change. We moved from the Helm chart release process to use our own Helm templating and release solution. What does that mean? From now on, we don’t use Helm releases to track versions of a deployment. One Eye (both CLI and Operator) renders Helm templates and uses our own objectmatcher tool. In practice, reconcile loops won’t cause Helm release updates, which will only apply to resources that differ from their earlier versions. One more benefit is that we can automatically update CRD resources, as well (which Helm 3 couldn’t do).

As of this release, a new logging engine will be put in place. If you are familiar with Backyards, our great istio toolset, the same interactive grouped logging is available in One Eye! 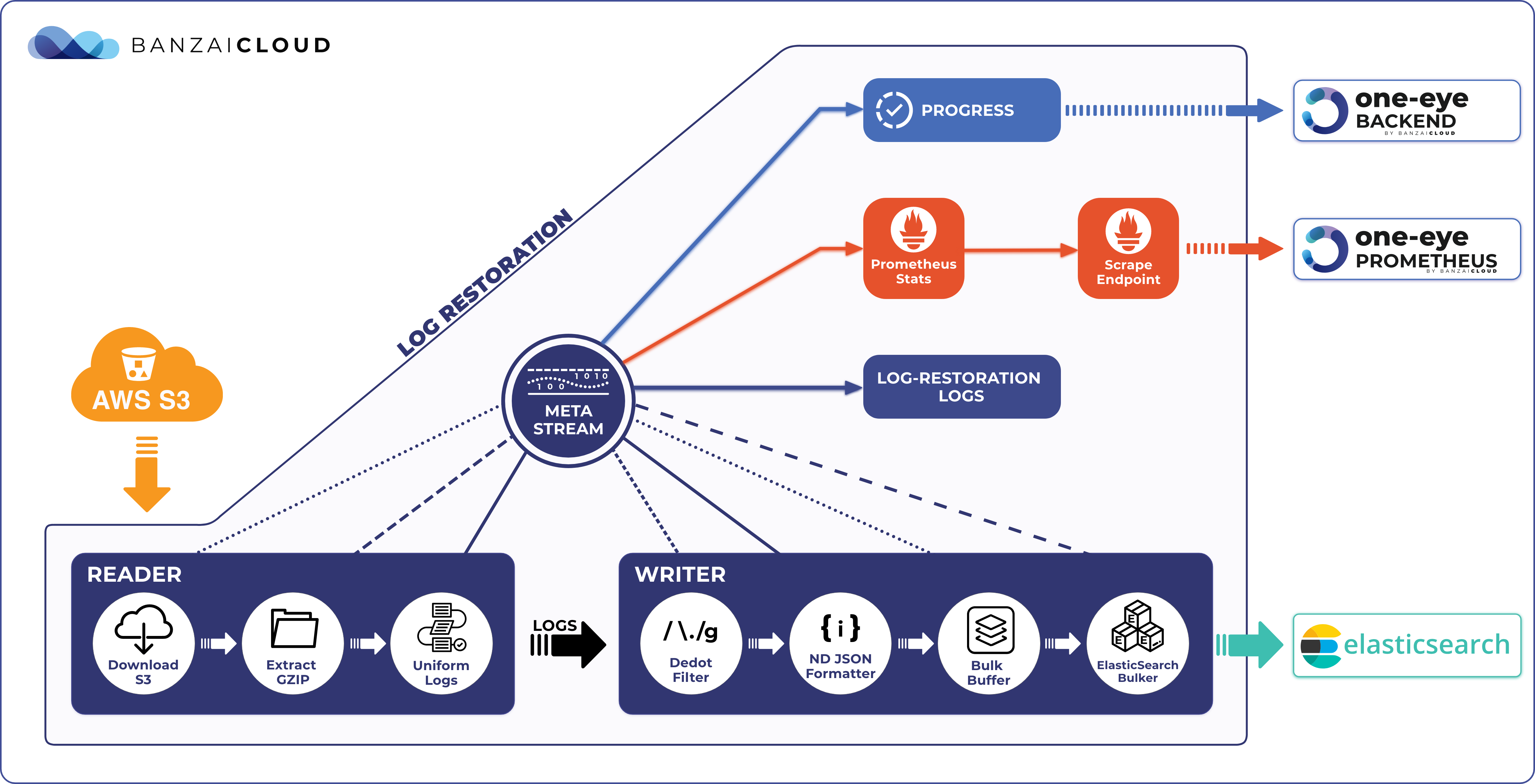 Tap into Kubernetes logs with the Logging Operator
article 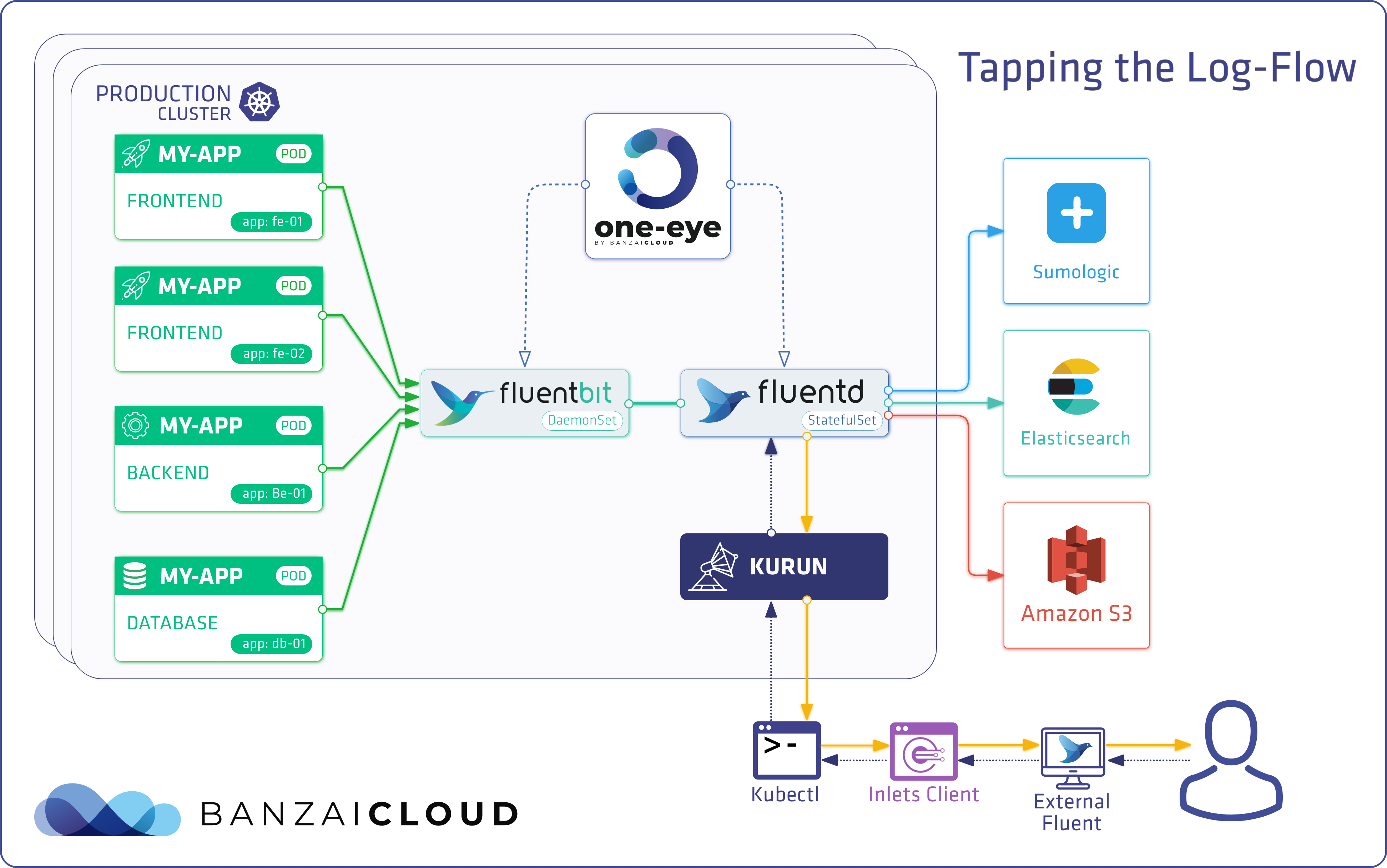 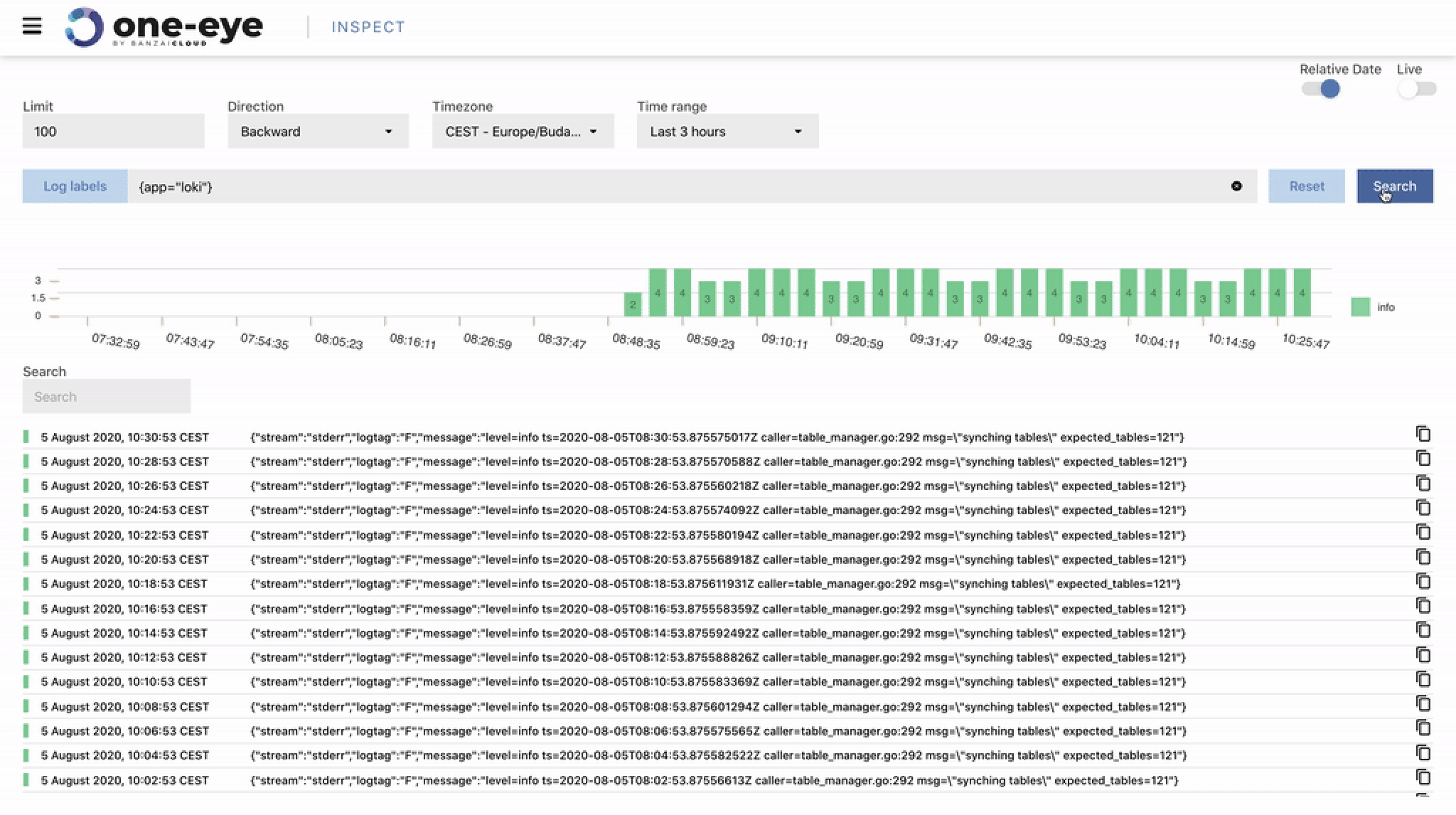