One of the core features of the Istio service mesh is the observability of network traffic. Because all service-to-service communication is going through Envoy proxies, and Istio’s control plane is able to gather logs and metrics from these proxies, the service mesh can give you deep insights about your network. While a basic Istio installation is able to set up all the components needed to collect telemetry from the mesh, it’s not easy to understand how these components fit together and how to configure them in a production environment. It becomes even more difficult when the mesh expands to multiple clusters across different cloud providers, or in a hybrid or edge-compute environment. This blog post tries to explain how Istio telemetry works and walks through some practical monitoring examples, like configuring Prometheus targets and exploring available metrics. At the end of the post, you’ll get a sneak peak into Banzai Cloud’s new Pipeline component - a multicloud and hybridcloud management platform built on top of our Istio operator.

The Istio Control Plane is split into a few different components, one of them is called Mixer. But Mixer itself is two different deployments in Kubernetes. One is called istio-policy, the other is called istio-telemetry. As their names already tell, these components are responsible for providing policy controls and telemetry collection respectively.

The Envoy sidecars from the application pods call istio-policy before each request to perform precondition policy checks, and after each request to report telemetry. The sidecar has local caching such that a large percentage of precondition checks can be performed from cache. Additionally, the sidecar buffers outgoing telemetry such that it only calls Mixer infrequently.

Running Mixer on the Istio control plane is optional, if you don’t want central policy checks and telemetry you can disable these components completely. When enabled, these components are highly extensible, and can be driven entirely from custom resource configuration. If you don’t want to dive deep into Istio configuration, or don’t want to use your own infrastructure backends to collect logs or metrics but rely on the defaults (stdio logs, Prometheus metrics), you won’t need to care about these things at all.

But if you’d like to use a different adapter - like Stackdriver - you’ll need to update the custom resource configuration of Mixer. Istio has the concept of handlers, instances and rules. Handlers determine the set of infrastructure backend adapters that are being used and how they operate, instances describe how to map request attributes into adapter inputs, and rules bind handlers and instances together. If you want to learn more about these concepts, you can read the official docs here, but this blog post will provide some examples of the defaults later. 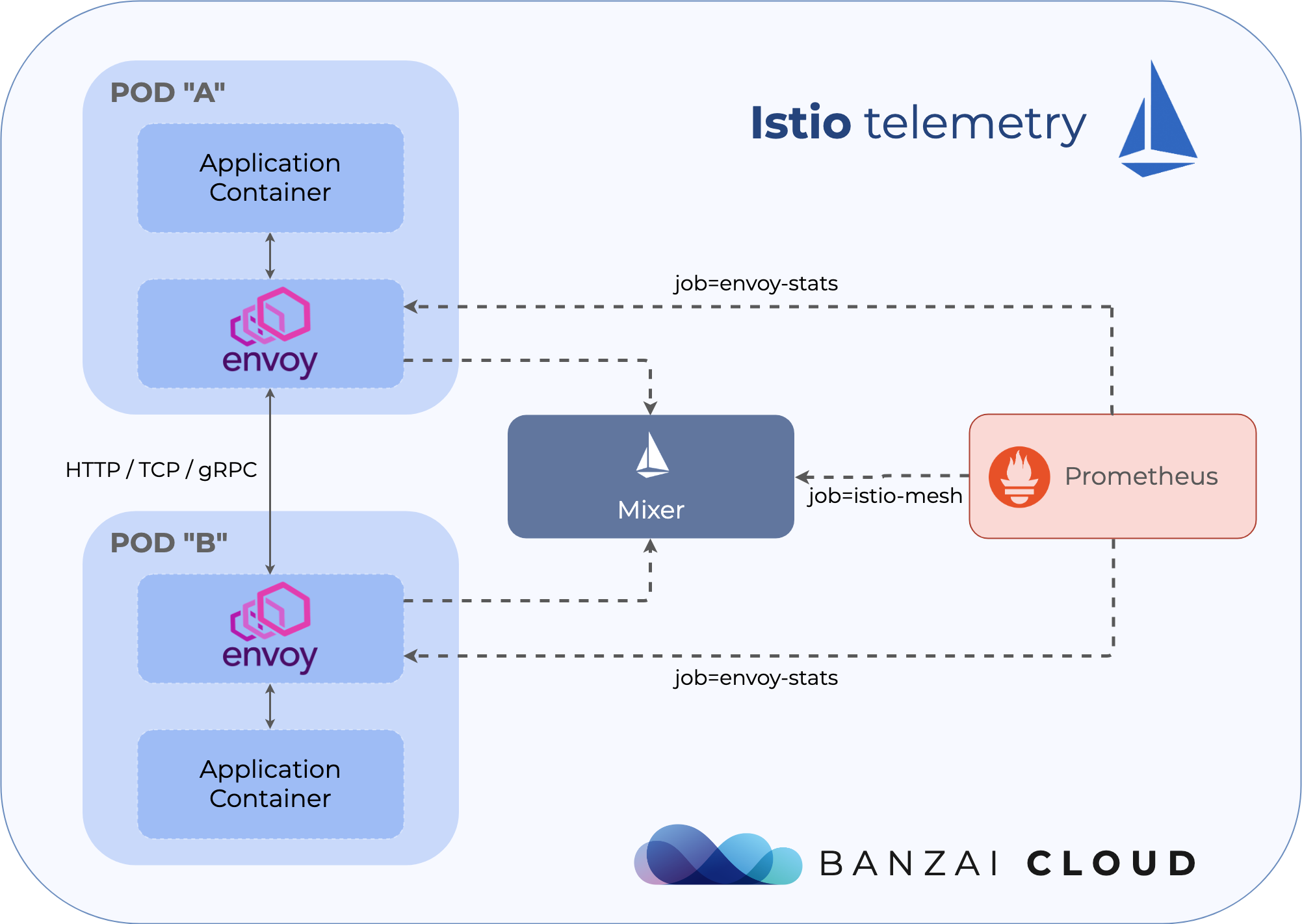 Istio’s documentation has some examples about collecting custom metrics, or querying metrics from Prometheus, but it lacks a very important topic: understanding and configuring Prometheus scrape targets.

If you just want to try out Istio, you’ll probably deploy it using the official Helm chart (though we recommend our Istio operator for a better experience). The Helm chart includes a Prometheus deployment by default where targets are properly configured. But in a production environment, you usually have your own way of setting up Prometheus and configuring your own targets to scrape. If that’s the case, you’ll need to include the Istio scrape targets manually in your configuration.

First, let’s take a look at these targets. If you check out the configuration here, you’ll see that Istio adds more than ten jobs to Prometheus. Most of them are collecting custom metrics from the Istio control plane components. An example of that is how Pilot reports telemetry about xDS pushes, timeouts or internal errors through metrics like pilot_xds_pushes, pilot_xds_push_timeout and pilot_total_xds_internal_errors. These jobs are named after the components and scrape the http-monitoring port of the corresponding Kubernetes service. For example, the job that scrapes pilot looks like this:

But the two most important targets are istio-mesh and envoy-stats. Including the first one in prometheus.yml will allow Prometheus to scrape Mixer, where service-centric telemetry data is provided about all network traffic between the Envoy proxies. envoy-stats on the other hand will query the Envoy proxies directly and will collect endpoint-centric telemetry data about the same network traffic (see metrics like envoy_cluster_upstream_rq).

Mixer uses Pilot to enhance the telemetry data reported by Envoys with Kubernetes service details, so data coming from Mixer will contain richer information that includes service and workload names among other Kubernetes specific stuff. But according to some blog posts, sending telemetry data from every sidecar proxy in the cluster to a central deployment has some severe performance effects, and it may be worth turning Mixer completely off on a large cluster, and relying only on envoy-stats, even if that means losing feature parity.

The yaml config for istio-mesh adds a job that queries the istio-telemetry service’s prometheus port:

The yaml config of envoy-stats is more complicated, but the important part is here. It selects pods with a port name *-envoy-prom and queries /stats/prometheus:

When using the Helm chart to deploy Prometheus to a cluster, these targets can be added to values.yaml, or directly edited in the configmap that holds prometheus.yaml and is mounted to the Prometheus server pod.

A better way to deploy Prometheus to a cluster is to use the Prometheus operator. In that case configuring targets is a bit different - instead of editing prometheus.yml directly, you can define ServiceMonitor custom resources that declaratively describe a set of services to monitor, and the operator will translate them to proper Prometheus yaml configuration in the background. For example, a ServiceMonitor entry that defines the scraping configuration of mixer telemetry looks like this:

In the Istio documentation, the first task about metrics has the title Collecting new metrics. It does a good job describing how Istio utilises custom resources to configure instances, handlers and rules, and how to create a new metric that Istio will generate and collect automatically, but it can be considered as an advanced scenario. In most use cases, the default set of metrics covers everything that’s needed, and an Istio user doesn’t need to understand these underlying concepts.

Our Istio operator (and also the Istio Helm charts) comes with these default metrics initialised. If you have Istio up and running in a cluster, and Prometheus is configured to scrape telemetry from Mixer, you won’t need to do anything else to have telemetry data about network traffic between services in the mesh. Once you have some traffic between Envoy sidecars, you can open the Prometheus UI (or use the query API) to check out metrics collected by Prometheus.

If you’re still interested in the internals of how these metrics are configured in Mixer, you can check out the corresponding Istio custom resources in the cluster. If you get the metric CRs from the cluster, it lists eight different resources that will be translated to Prometheus metrics:

The handler configuration describes the Prometheus metrics and references the previous metric custom resources in the instance_name fields. It also defines the name that can be used in Prometheus queries later (with the istio prefix), like requests_total:

The last building block is the rule custom resource that binds the metrics to the handlers:

If you still need some custom metrics about network traffic, you’ll need to add custom resources of these types. To do that, you can follow the Istio documentation.

Istio and its telemetry component can be intimidating at first, especially if there are multiple clusters involved. We deeply care about simplifying service mesh use in multi-cluster environments as we are focused on building a multi- and hybrid-cloud platform at Banzai Cloud. The fruits of our labor are about to be released at KubeCon: a visual tool for monitoring and configuring service mesh activity. We considered using other tools, for example Kiali, but it fell short on multi-cluster support and the ability to specify configuration options through the UI. So we ended up writing our own UI and back-end infrastructure for communicating with the service mesh. This new tool will be released soon at KubeCon and will be available as part of the Pipeline platform, so stay tuned! 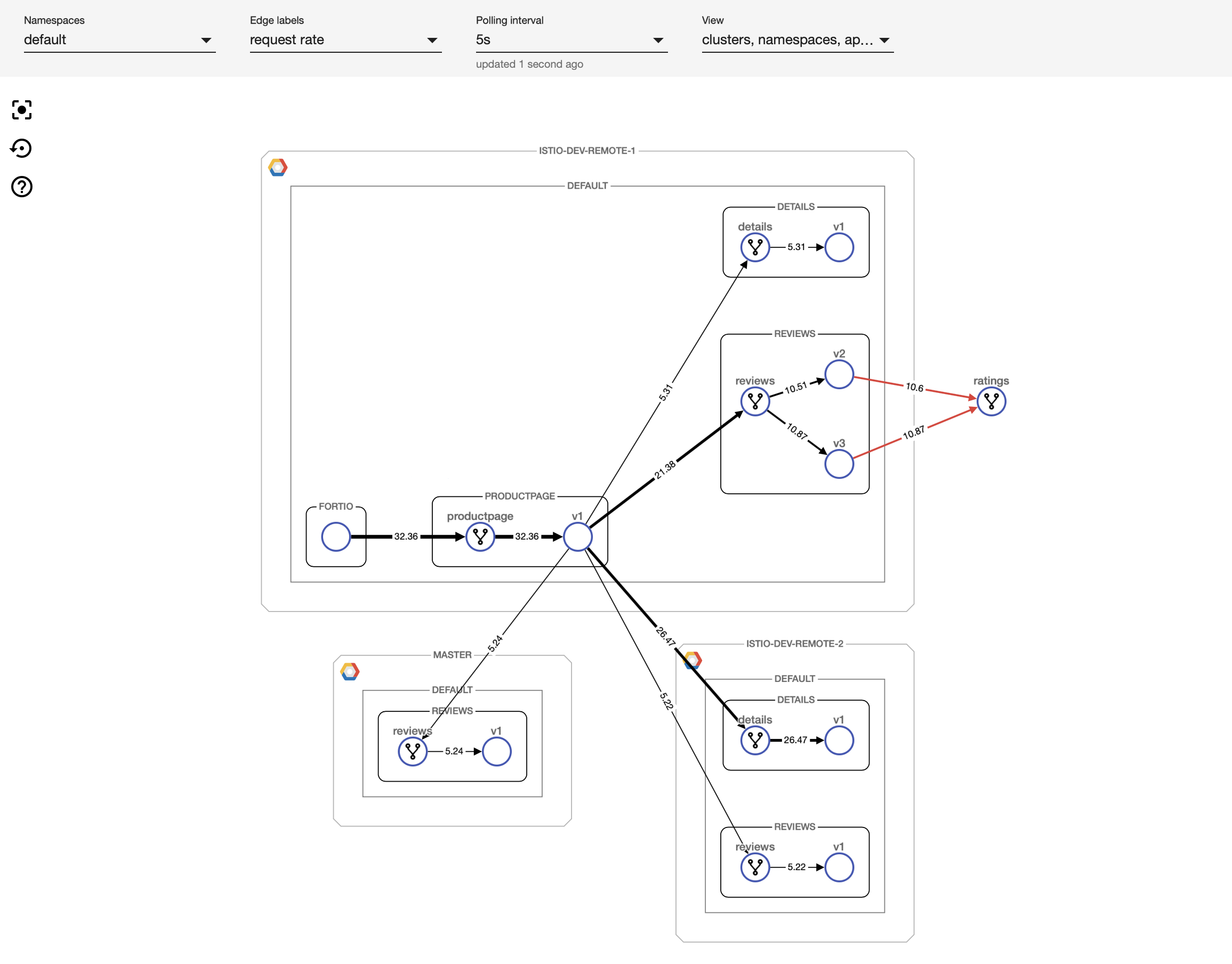 Banzai Cloud changing how private clouds get built to simplify the development, deployment, and scaling of complex applications, bringing the full power of Kubernetes and Cloud Native technologies to developers and enterprises everywhere. 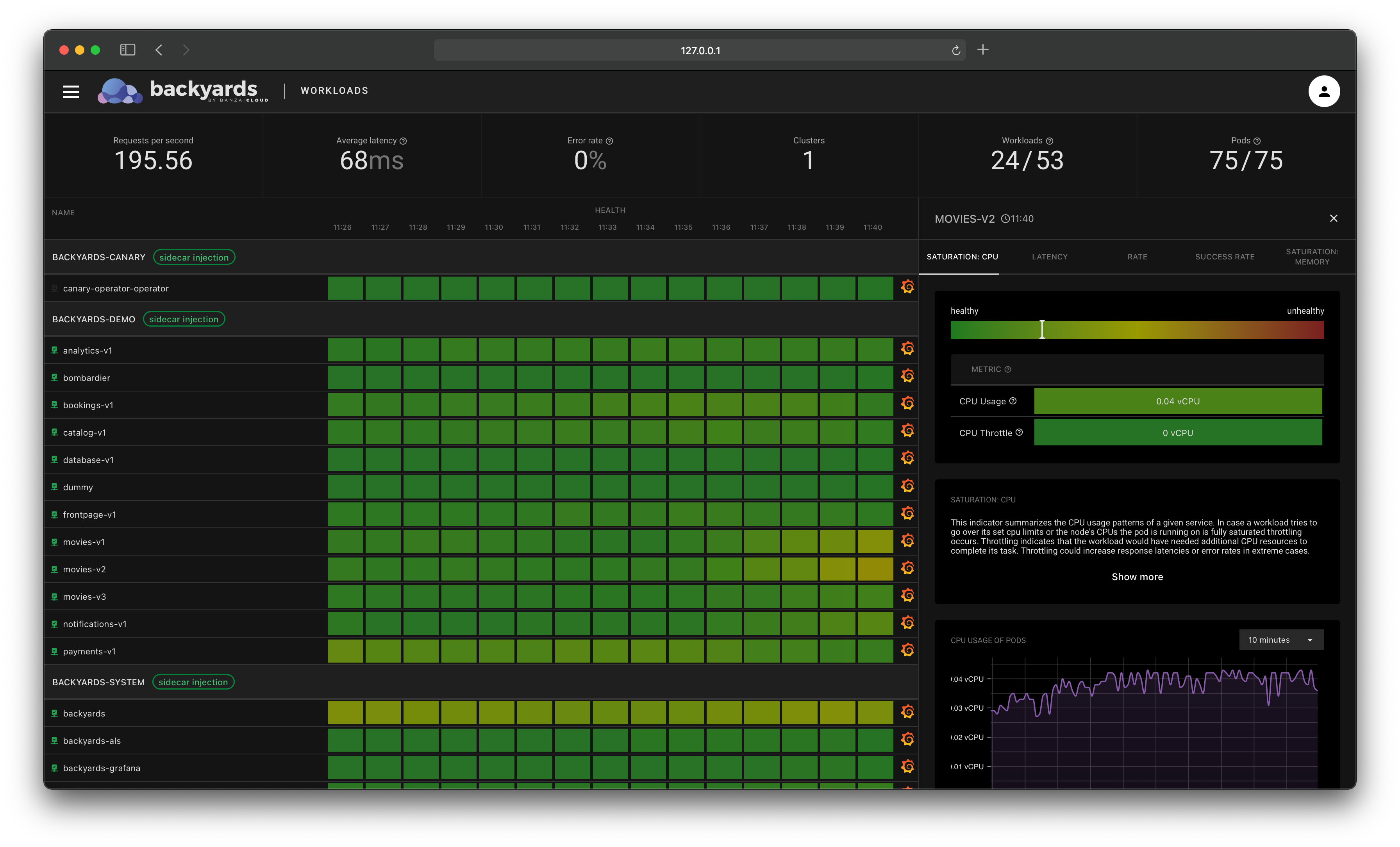