Pipeline’s built-in CI/CD solution is capable of creating Kubernetes clusters, running and testing builds, packaging and deploying applications as Helm charts, and lots more—all while its secrets are stored and managed by Vault.

These days CI/CD systems do way more than just build code: they access SCM repositories, push artifacts, create clusters, and more—all in multi-tenant and (often) open source environments. Simultaneously, developers within a given organization may have different roles and authorizations, however, they all need to be able to start builds and check their outcomes and logs. It’s difficult to manage all that: requires lots of maintenance, and storage way in excess of environment variables, files, or being stuck in CI descriptors.

Also, secrets should be short lived, or volatile—they should be easily and often revoked and replaced (especially when they are compromised), all of which should be automated.

We quickly realized this while working on Pipeline and:

In Pipeline, users are members of organizations. Users may invite other users into organizations, and a user can be a member of more than one organization at a time. These organizations can have different types of associated resources: Kubernetes clusters created inside organizations, object storage buckets, spotguide catalogs, etc. One feature that all these have in common is that they require secrets to work properly. Usually, these secrets allow Pipeline to interact with your cloud provider account in order to provision and manage any underlying resources. Secrets may also be associated with applications running on your Kubernetes clusters, like a TLS certificate chain for MySQL, or a Kubernetes cluster’s own credentials. Secrets are stored in Vault with added layers of abstraction that allow them to be provided to applications and build pipelines. 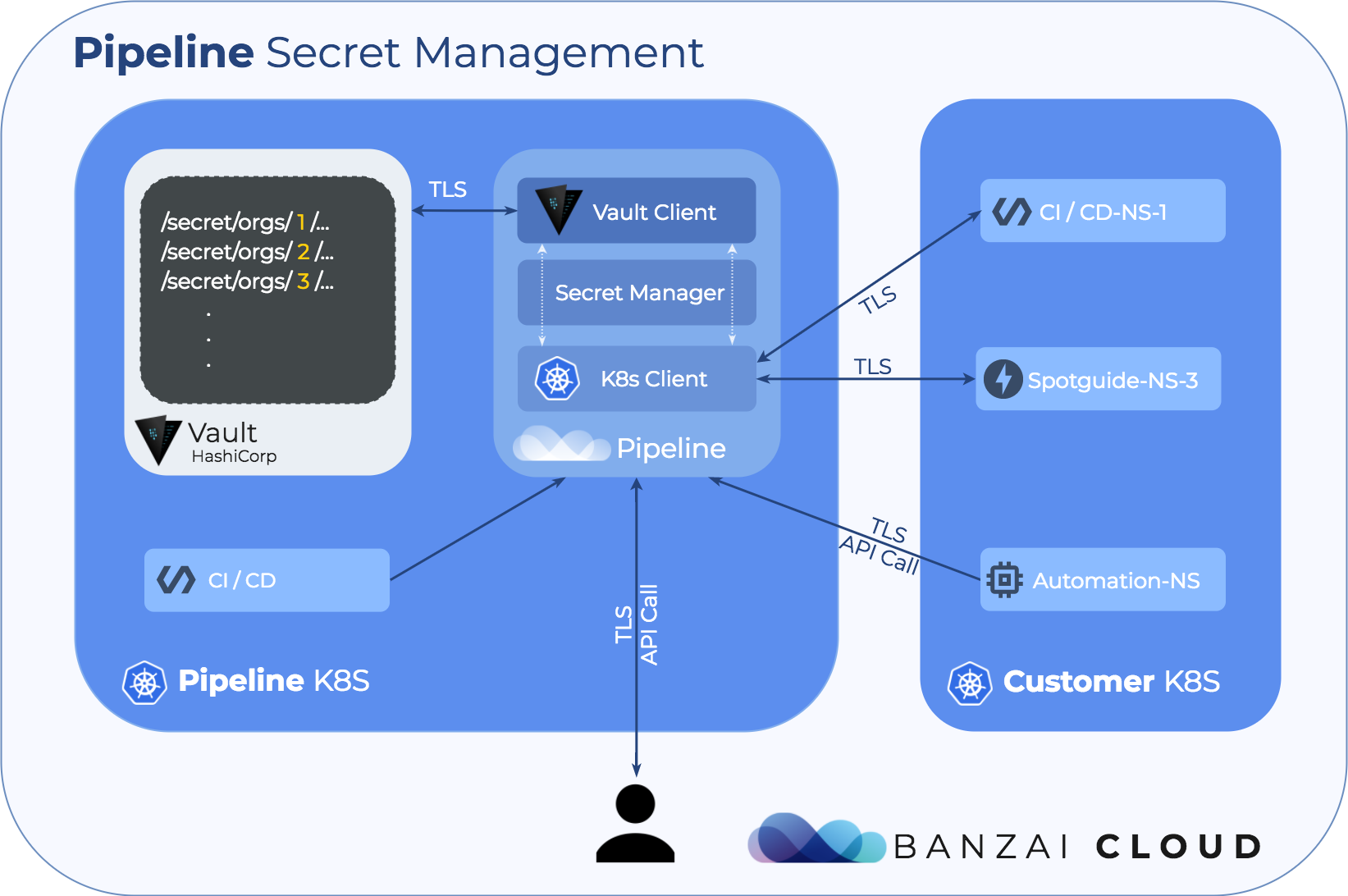 At some point, you’ll probably be executing a build step that needs to use a credential to do its job. In the CI/CD flow, which runs natively on Kubernetes, Pipeline secrets can be injected directly into Pods that represent build steps. If you need one of your secrets for a specific build step, you can specify it in the step’s secretFrom parameter. This binds the value of a secret’s field to an environment variable supplied to your build step. For example, you can use a secret that’s holding Docker Hub credentials to build and push an image:

To use a Pipeline secret in the steps of a specific CI/CD project, you must first attach the secret. On the web interface, go to the CI/CD page, click on the project’s settings button, and attach the secret you want to use.

A plugin’s documentation will specify the name of the environment variables that the plugin expects the credentials to be in, but you have the freedom to choose how you store them in Pipeline. Generally speaking, it’s possible to create a Generic-type secret, and add fields to it with the same names as the variables. Then the keys in the secretFrom object will be repeated as keyRefs, and the name parameter will be the same for all variables. However, the example of a docker plugin above uses a Password type secret, which has username and password fields. These are mapped to anticipated variable names.

If your application (your Helm charts) needs credentials in the form of Kubernetes Secrets, you can install them to the cluster in order to let the Pods of a given namespace consume them. The following code snippet is an example configuration for installing a secret:

With the help of the Pipeline, users can define how these secrets should be injected into the Kubernetes cluster their build is running on.

CI/CD for Kubernetes, through a Spring Boot example
article