We’re happy to announce that, as of today, we have opensourced a DAST operator and will soon be adding it to Pipeline.

At Banzai Cloud we strive to ensure that our applications are (security)tested from all aspects, to ensure the highest levels of security as well. In order to achieve the best results, we use a variety of methods for our security testing. The two most well-known approaches to security testing are SAST and DAST. The main difference between them is that SAST is a form of white box testing, while DAST is black. Static analysis (like searching dependencies for vulnerabilities) is relatively simple and can be easily integrated into CI workflows. Although examination of the source code may provide solid data about code security, dynamically testing an application during operations is crucial for determining its real security state.

In the world of containers, microservices, Kubernetes and distibuted teams, where applications change fast, the only way to ensure that all of the applications will be security scanned before the services are exposed to the public is to automate testing. Thus, we started to think and work on a solution which will help us reach this goal on Kubernetes.

DAST, or Dynamic Application Security Testing, also known as black box testing, can find security vulnerabilities and weaknesses in running applications, typically web apps. It does that by employing fault injection techniques, such as feeding malicious data to an app, to identify common security vulnerabilities like SQL injection and cross-site scripting. DAST can also cast a spotlight on runtime problems that can’t be as easily identified by static analysis - for example, authentication and server configuration issues - as well as flaws that only become apparent once a known user logs in.

How we started to automate DAST 🔗︎

At Banzai Cloud we write lots of Kubernetes operators. Here are just a few of the popular ones:

Building on our experience of writing operators, we decided to build the DAST tool as a Kubernetes operator. Enter the dast-operator, which uses and leverages OWASP ZAP to perform automated application security testing on K8s. 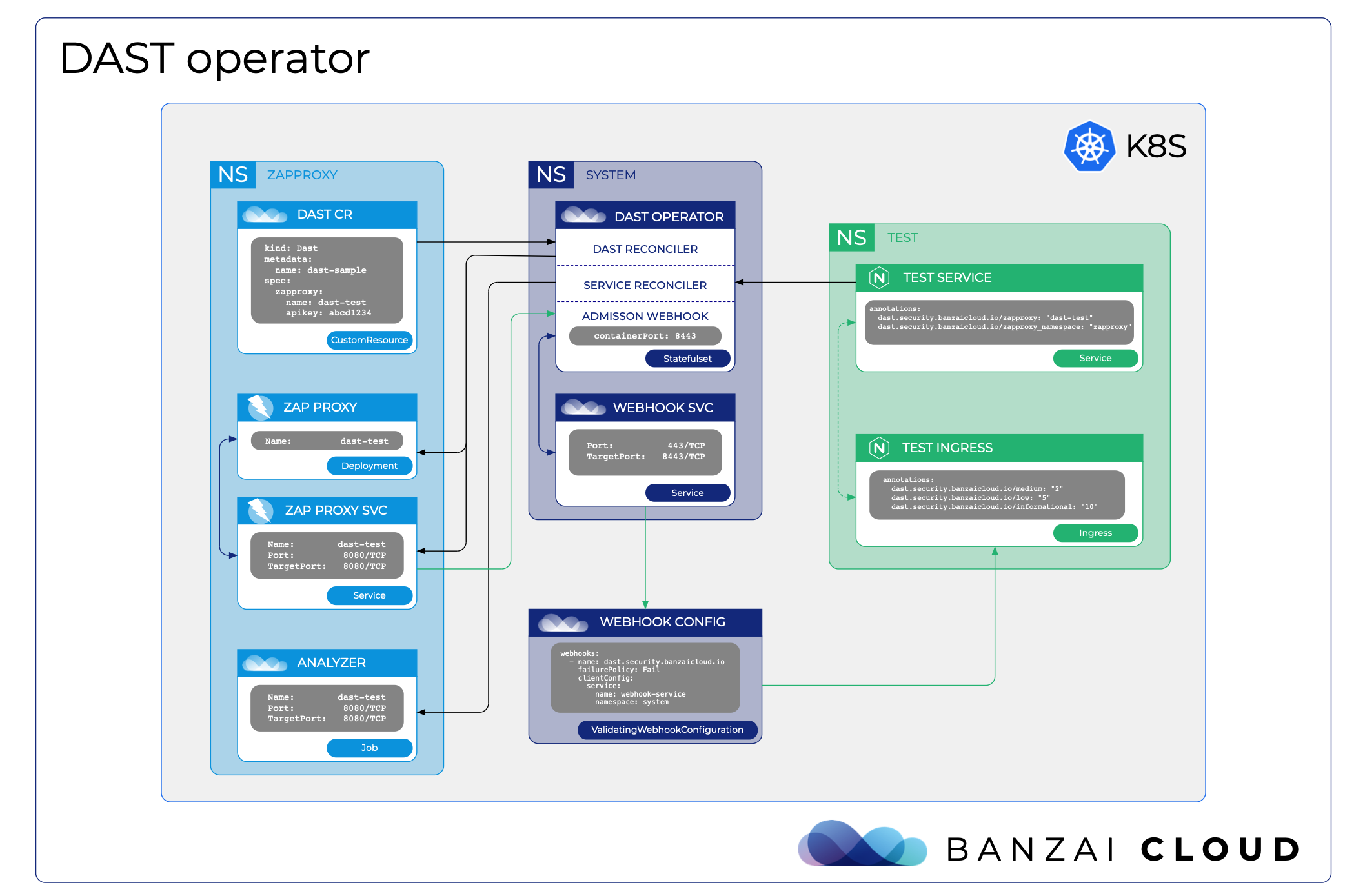 The features currently available through the dast-operator 🔗︎

Structure of the dast-operator 🔗︎

The DAST reconciler is responsible for:

The Service reconciler is responsible for:

The Validating Webhook is responsible for:

The following animated image shows how the example works:

First, we deploy ZAP to the zaproxy namespace by applying the DAST CustomResource.

2. Deploy an application and initiate an active scan

The ZAP is now deployed, so let’s create a test with a properly annotated service.

Once our test service has been scanned, let’s deploy an ingress with test-service backend.

The ingress deployment will succeed, because the scan results will be below the pre-defined thresholds that have already been set in annotations.

Now we’ll initiate a security test targeted to an external URL by using a separated ZAP in an external namespace.

This is the first release of our dast-operator, however, it’s only the beginning. While the operator already automates the detection of many common mistakes, we don’t plan on stopping there. Our short term roadmap looks like this:

If you’d like to add your feature requests, or PR, or just star our GitHub repo, please feel free to visit the dast-operator repository. Thank you!